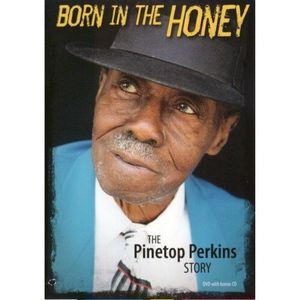 Pinetop Perkins was one of the last great Mississippi bluesmen of his generation.  He began playing blues in the late 1920s, and is widely regarded as one of the best – and certainly most enduring – blues pianists. He has forged a style that has influenced three generations of piano players, and continues to be the yardstick by which great blues pianists are measured.

Pinetop and Willie received a Grammy® for this recording in 2011 for Best Traditional Blues CD for Joined at the Hip with Telarc Records.

Born Willie Perkins in Belzoni, Mississippi in 1913, Pinetop started out playing guitar and piano at house parties and honky-tonks, but dropped the guitar in the 1940s after sustaining a serious injury in his left arm. He worked primarily in the Mississippi Delta throughout the 1930s and ‘40s, spending three years with Sonny Boy Williamson on the King Biscuit Time radio show on KFFA in Helena, Arkansas. Pinetop also toured extensively with slide guitar player Robert Nighthawk and backed him on an early Chess session. After briefly working with B.B. King in Memphis, Perkins barnstormed the South with Earl Hooker during the early ‘50s. The pair completed a session for Sam Phillips’ famous Sun Records in 1953. It was at this session that he recorded his version of “Pinetop’s Boogie Woogie,” a song originally written and recorded by pianist Clarence “Pinetop” Smith – the influential blues pianist who had died from a gunshot wound at age 24 in 1929. Although referred to as “Pinetop” when he played on King Biscuit in the 40s, it was his sensational version of this song that secured his lifelong nickname.

Born In The Honey: The Pinetop Perkins Story

DVD with Bonus CD - Born In The Honey: The Pinetop Perkins Story is a 60 minute documentary tracing the journey of old piano legend Pinetop Perkins. His story, as told through in-depth interview with fellow friends and musicians such as Bobby Rush, Ike Turner, Kim Wilson, and others, portrays the struggles and triumphs of Pinetop’s life and compels

DVD with Bonus CD - Born In The Honey: The Pinetop Perkins Story is a 60 minute documentary tracing the journey of old piano legend Pinetop Perkins. His story, as told through in-depth interview with fellow friends and musicians such as Bobby Rush, Ike Turner, Kim Wilson, and others, portrays the struggles and triumphs of Pinetop’s life and compels the viewer to a deeper understanding of his musicianship.

Read more…
Share
Although he enjoyed success as a solo artist since the 1980s, Pinetop was known for holding down the piano chair in the great Muddy Waters Band for twelve years during the pinnacle of Muddy’s career. Replacing Otis Spann in 1969, Pinetop helped shape the Waters sound and anchored Muddy’s memorable combo throughout the seventies with his brilliant piano solos. In 1980, Pinetop and other members of Muddy’s crew struck out on their own and formed the Legendary Blues Band – a group that recorded two records for Rounder and toured extensively, culling several GRAMMY® nominations.

After being labeled a sideman for most of his career, Pinetop eventually left the Legendary Blues band to concentrate on solo work. Within two years, he had cut his first domestic record as a frontman and pursued an ambitious tour schedule. He was featured on several nationally syndicated news and music programs, and appeared in numerous movie productions and TV and radio ads. He also headlined nearly every major showcase room in North America and most of the major festivals around the world.

The great irony of Pinetop’s career is that he didn’t blossom as a headliner until his eighth decade – a phenomenon that resulted in the release of 15 solo records in 15 years, beginning in 1992. Born In the Delta (1997) – a multimedia enhanced CD released on Telarc International, a division of Concord Music Group – documented the life and work of an amazing historical figure and offered an abundance of entertainment value for a contemporary audience. On his 1998 release, Legends, Pinetop collaborated with master blues guitarist Hubert Sumlin. Together, they blended the traditional Delta blues sound with modern electric blues rock, showcasing the spirit and energy of the music. Born in the Delta and Legends were both nominated for GRAMMY® Awards – in 1997 and 2000 respectively. This was followed by a 2005 GRAMMY® nomination for Ladies Man, released by MC Records. That same year, he was also presented with a lifetime achievement award at the GRAMMYs®.

Aside from his well-deserved GRAMMY® recognition, Pinetop also received a National Heritage Fellowship in 2000 from the National Endowment of the Arts. He has been featured in the documentary Piano Blues, directed by Clint Eastwood for the Martin Scorsese PBS series, The Blues. In addition, he continued to win the Blues Music Award for best blues piano every year until 2003, when he was retired from the running and the award was renamed the Pinetop Perkins Piano Player of the Year.

In 2007, still on the road in his 94th year, Pinetop Perkins’ unique life was chronicled in Peter Carlson’s biographical documentary DVD, Born In The Honey, which includes a live CD with a rare studio outtake track.  That same year he was awarded a Grammy® along with Honeyboy Edwards, Henry James Townsend and Robert Lockwood Jr. for Last of the Great Mississippi Delta Bluesmen on the Blue Shoe Project.

Pinetop Perkins and Friends, released on Telarc in the summer of 2008, positioned Pinetop in the midst of several high-profile guests – including such luminaries as Eric Clapton, B.B. King and Jimmy Vaughan.   This release garnered another Grammy® nomination.

His last recording was Joined at the Hip, a collaborative project with the late Willie “Big Eyes” Smith released in June 2010. The album features Smith on harp and the majority of vocals, leaving the drummer’s chair open for his son, Kenny Smith. Joined at the Hip includes a mix of material written by Smith along with a few chestnuts from the annals of Delta and Chicago blues.

Pinetop and Willie received a Grammy® for this recording in 2011 for Best Traditional Blues CD for Joined at the Hip with Telarc Records.